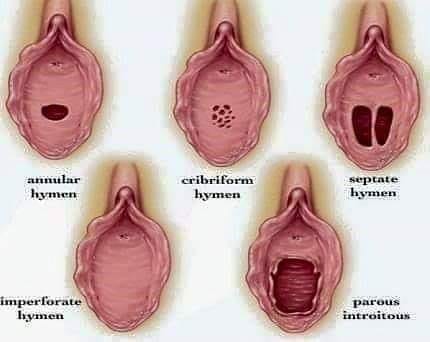 The myth about female virginity and the expectation that women must bleed during their first sex is very common  in South Sudan especially among Dinka, Nuer, Mundari and other tribes. Allow me to talk about South Sudan, as that where I originate from. Not all women bleed the first time they have sex, as I will explain in this article.

To understand why some women bleed the first time they have sex while others don’t, it’s very important to first understand the nature of hymen. The HYMEN is a membrane that covers part of the vaginal opening {it doesn’t always block or cover the entire vagina, as some people mistakenly think}. Secondly, not all women have a hymen. The hymen also differs from woman to woman- just like we all present in different body features and sizes. Some women have thick hymens while others have larger or thin hymens. Other women naturally have a very little amount of hymen that covers only small portion of their vaginal opening and hence does not really get in the way during first time sex.

In addition to this, hymen wears off on its own as a woman grows up especially if the hymen is very thin and with exercise, bicycling, horseback riding. It can also wear off due to other physical activities such as  dancing or from usage of tampons during menstruation. This results in the overwhelming majority, i.e. at least the 63% of women do not bleed during their first time sex, according to a study published by the British Medical Journal.

Women who however do bleed include:

The result is that only a small percentage of women bleed for the first time! [only 37% bleed during first time sex, according to the study published by British Medical Journal.

Why is it so important to be aware of?

Women all of over the world get abused, injured and even killed due to myth of ‘Virginity bleeding. Most men and women think that bleeding is a sign of virginity, women who don’t bleed for first time have been divorced, suffered from suspicion leading to domestic violence and abused or even killed for honor.

Educating people that a girl doesn’t necessarily have to bleed during her first time sex literally save lives.

Washindi Africa is non-political, non-profit youth led organisation founded in 2015 by youth volunteers in Kilifi, Kenya to empower the community on areas of health and education through health programs and education initiatives.